Did you know that the Industrial Revolution inspired the Thanksgiving Holiday we all know and love today?

Fun fact: in 1846, a Philadelphia magazine editor named Sarah Hale thought that the Industrial Revolution would be the decline of western civilization eroding the American way of life. She wanted a holiday that would celebrate home, heart and wholesome family values. So, she spent the next 17 years writing letters to every person with any kind of authority until, in 1863, Abraham Lincoln finally declared it a national holiday to be held on the third Thursday of November. source ~ Sarah Hale legacy

I may or may not agree with Sarah about the Industrial Revolution, but I salute her for the resulting holiday that is centered around family and of course food and wine!  She was, however, not able to stop the Industrial revolution. It is still alive and well – kinda – in a throwback decorating kind of way, called Steam punk or what I like to call ‘Vintage Industrial’.

I love adding some off-beat stuff into my decorating. Vintage Industrial/Steam punk lamps don’t come cheap. Unless of course you salvage the parts and make them yourself 🙂 What self-respecting hoarder would not rescue every bit of heavy rusty metal parts that they happen to come across to make lamps?

Here’s some pretty great ones from Etsy: 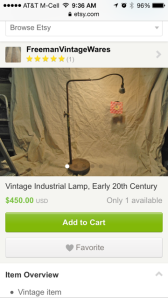 Can you see the price tags on them? I figure I’ve saved a small fortune by making my own. Money I will endlessly sink into an old German rust-bucket that I love dearly. Cousin Gary is like a V-Dub magician. I get daily text updates of the progress; that end of the year deadline is actually possible thanks to his magic.

Here’s some from around the house (notice, no price tag): 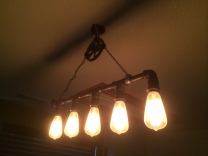 And, what you’ve all been waiting for…. New floor lamps anchored by 61 Volkswagen Bug brake drums:

The doubt I have to put up with. Oh, Steve of little faith. His question may have sounded innocent enough, ‘what are you going to do with them’. But, I don’t think so. I’m sure it was a carefully worded challenge that if not responded to properly, would result in my precious brake drums being pitched into the dumpster. The success of a response to a comment like this also hinges on the correct don’t-mess-with-me tone of voice. The tone that says I am taking that rusty junque home with me and you will thank me for it before I’m done. lol

Yeah – they are Amazing. The Tiny Dictator is so pleased with himself.

Steve thought this Chardonnay was nice and fruity. Terry almost agreed, she found it to be smooth and fruity. Arvin tasted pear. Connie said it was very good and Larry agreed.

From the label: Our move to California in the late 1990’s was a light packing job: we brought with us just a couple of dollars and a pocketful of intentions. As the years have gone on, little by little, vine by vine, we’ve rediscovered ourselves as winemakers. Raviva is our tribute to the comforts we leave behind for the sake of transformation.

I usually cannot identify any aroma, until this Chardonnay. I immediately smelled vanilla. I took me a couple of trys to find the right word though. Larry said it was buttery and Connie said it was so unique and delicious, unlike any Chardonnay she’d had before.

From the label: Like the many exciting colors of a kaleidoscope, Spectacle Wines offer a compelling splash of aromas and flavors that unfold on the palate with each sip. Spectacle Chardonnay offers up subtle aromas of ripe grapefruit and freshly sliced Golden Delicious apples. Elegant flavors of soft vanilla and ripe melon join on the palate over a toasty oak finish.

Pinot Noir, the go-to red wine for turkey pairing on Thanksgiving. Terry commented that this was good tasting – cherryish – light. Larry agreed, saying it was very good with a mild body. I found it to be much lighter than I’d expected. It went well with the turkey and I think it would be easily drinkable for guests that may not be regular wine drinkers.

Not only did we all agree that the picture on the label was great and would look nice on a Thanksgiving table, but so was this red blend. Arvin liked the aroma. He said he was treating it like a vitamin B, holding it under his tongue to enjoy longer. Terry said it tingled her nose – which is always a trait of a good solid red. Connie exclaimed, “oh my goodness, that’s good”. She added that it had a sweet bouquet and was also very unique. Arvin had just been smelling it, and after finally tasting it he labeled it DAMN GOOD!

From the label: We make wine in a simple building. It humbles us to reflect on its age, being built in a time when the valley’s dairy cows and prune trees were more well-known than its grapes. With this reminder, we give thanks for all that we have.. and make wines with all that we are.

3 thoughts on “Are you ready for the Holidays? part 2”